The “Web of Things” (WoT) extends the Internet of Things so that physical object can be accessed and controlled using Web standards.

Project ASAWoO introduces the concept of “avatar” as a Web-compliant software extension of a thing. Physical things can therefore be coupled with avatars, to form cyber-physical objects that are compatible with WoT constraints and infrastructures. Avatars achieve interoperability between things using semantic technologies and expose high-level functionalities as RESTful resources. They can collaborate with other avatars and provide WoT applications that match end-users’ needs. Avatars are implemented using a distributed software platform that can be fully deployed on powerful objets, or distributed over resource-constrained objects and a cloud infrastructure.

Project documents (aka deliverables) are available on the ASAWoO Web Site

This video shows the ASAWoO platform running on a ROS-based robot, on a base station and on sensors. In this video, the robot is used to collect data from sensors, as well as to perform a video surveillance. When the robot detects a person in the area, it returns to its base station in order to deliver this information. 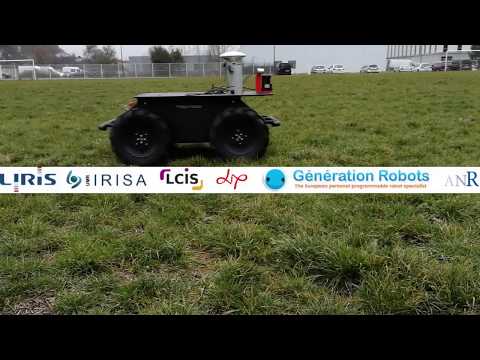 In ASAWoO, we consider 3 use cases. These uses cases are depicted in the figure below:

In the cloud use case, we consider three kinds of objects: 1) resource-constrained objects, which have not enough resources to run an ASAWoO platform, 2) objects that run only a part of their avatar due to their limited resources and that require a cloud infrastructure to remotely run their functionalities requiring a certain amount of computing and memory capacities, 3) and powerful objects that can run an ASAWoO platform (like in the standalone use case).

In the cloud, we can deploy an ASAWoO platform to host the avatars of the physical objects, a code repository and semantic repositories.

Cloud and gateway use case

In the last case (i.e. the cloud and gateway use case), we consider that the platform that hosts the avatars is installed on a domotic gateway and not in a cloud. In this last case, only the code repository and the semantic repositories are installed in the cloud. Like in the previous use case, an avatar can be distributed on a physical object and on the gateway.

As shown in the figure below, an avatar is based on a set of managers.

A platform can host serveral avatars. A platform is basically composed of a runtime environment hosting avatars, of a set of semantic repositories (context, capacities, functionalities, and WoT application), and of a code repository. A platform also has a manager to instanciate the avatars. 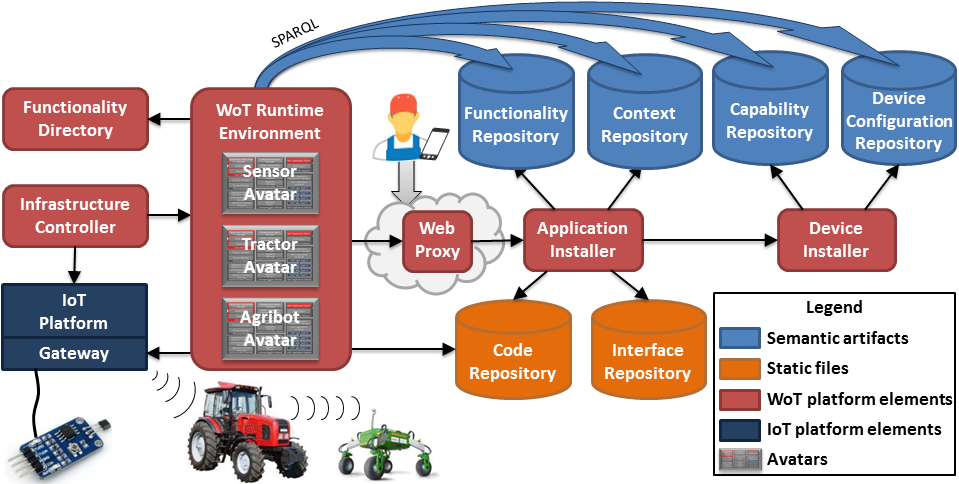